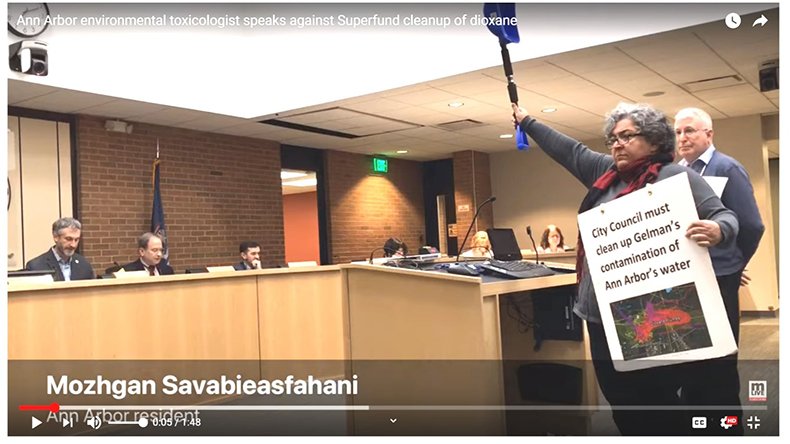 Shovels in the ground now!

Dr. Mozhgan told City Council to put its shovels in the ground now, and clean up the toxic dioxane mess. She reminded the Council that an EPA official just told them that it could take 30 years before a feasibility study could be completed, before EPA could even decide on whether to clean up the dioxane or not. If the City Council succeeds in passing the buck to the EPA, the Council could sit back and vegetate for 30 more years while the Gelman dioxane plume spreads further into our waters. On February 4, 2020, MLive reported on Dr. Mozhgan’s speech to the City Council: “Dioxane is classified by the EPA as likely to be carcinogenic to humans by all routes of exposure. It also can cause kidney and liver damage, and respiratory problems. “Just a few parts per billion in drinking water, with long-term exposure, poses a 1 in 100,000 cancer risk, according to EPA. “Ann Arbor resident Mozhgan Savabieasfahani, an environmental toxicologist who plans to run for council this year, encouraged city officials Monday night to move forward with a city-led cleanup. “For the second meeting in a row, she brought a shovel to illustrate her call for putting shovels in the ground.”