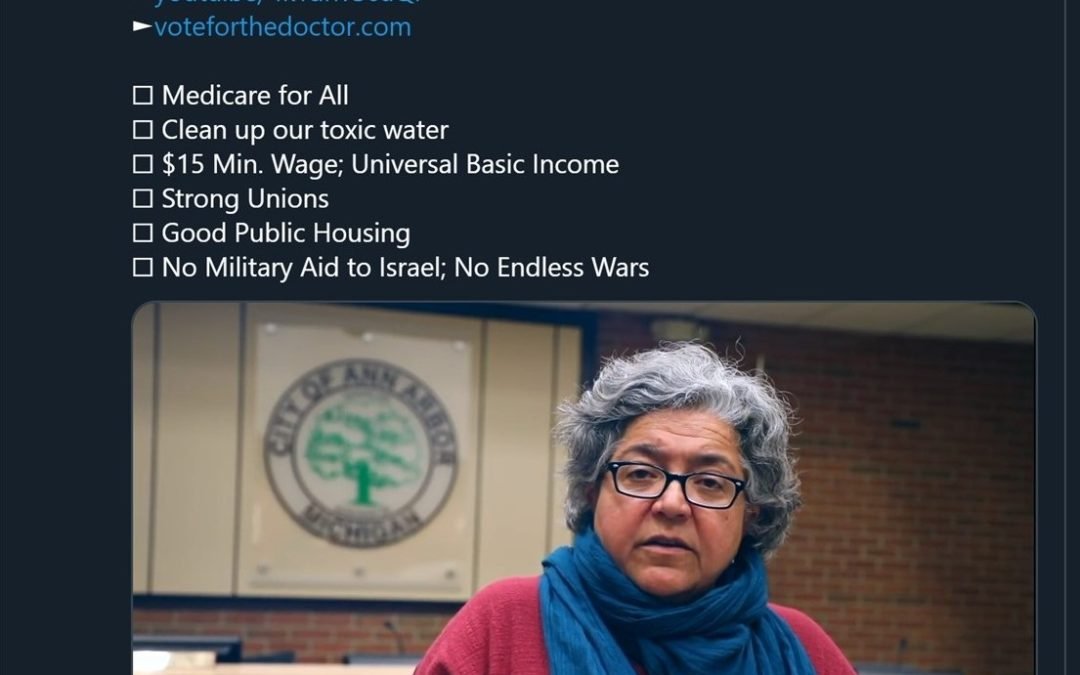 Dr. Mozhgan’s Plan for Her First 100 Days on the Ann Arbor City Council

Reporting on my public health publications:

I will go into action as soon as I’m elected to Ann Arbor City Council:

First, I will tell the City Council to stop kicking the can down the road when it comes to the Gelman dioxane contamination of our waters. City Council’s total disrespect for our environment and our health is vividly displayed by this expanding toxic waste catastrophe. I will demand a resolution committing the City to clean up that Gelman contamination immediately. No one else will do it. I will also propose that the City put a millage on the ballot to pay for it now, and pursue the polluter for reimbursement. This way, the cleanup actually happens in our lifetime, before more children risk exposure to dioxane. Otherwise, City Council will spend decades more in expensive meetings, negotiations, litigation, and begging the EPA to please do a feasibility study which the EPA admits could take decades, a study which the EPA would have the polluter do! The EPA told us that the study must come before any cleanup.

Second, I will tell the City Council they must enact a $15 an hour minimum wage law for the City of Ann Arbor. No City Council member has ever proposed this. That changes on the day I’m elected. I’ll demand a resolution to make $15 an hour happen just as soon as the Michigan legislature allows it, to be communicated to every member of the legislature by email.

Third, I’ll tell the City Council to buckle up and push for strong labor unions in Ann Arbor. Unions defend our basic rights, including our right to earn at least $15 an hour, so that people can pay their rent in this town. I’ll demand a resolution telling Congress to repeal the Taft-Hartley Act immediately, and telling the Michigan legislature to repeal its so-called “freedom to work” law. I will ask that this resolution be communicated to every member of the U.S. Congress and the Michigan legislature by email.

Those union-busting laws have virtually extinguished the labor movement in the United States, and have transformed Michigan into a haven for white-supremacist militiamen. Unions give us the organization to demand the basic necessities of life, including dignified work, dignified wages, education, medical care, housing, and transportation. Without strong unions, there is no organized body to stop raw racism from storming state legislatures and seizing control of the White House.

Fourth, I will tell the City Council to put its money where its mouth is on Affordable Housing. I’ll demand a resolution committing City Council to: (1) the abolition of single-family zoning as Minneapolis has already done, (2) the construction of enough good quality public housing so that every minimum wage worker in Ann Arbor can actually live in Ann Arbor, (3) telling Congress to repeal the Faircloth Amendment, which has largely illegalized public housing, and (4) enough funding for the Shelter Association of Washtenaw County to eliminate homelessness. I will ask that this resolution be communicated to every member of the U.S. Congress by email.

Fifth, I will tell the City Council to put its money where its mouth is on good jobs and education. I’ll demand a resolution that increases City funding to the Jobs Corp program operated by the Neutral Zone, so that every child who wants to get into college or a trade school will get the support he/she needs to do so. That means the Neutral Zone should be equipped to mentor them in their studies and career planning, and to pay for their education the whole way, while reporting to the City of Ann Arbor’s Community Services Area Administrator.

Sixth, I will tell the City to put its money where its mouth is about the COVID-19 pandemic, which is decimating the Black community. Almost half of those hospitalized with COVID-19 in Washtenaw County are Black, and only 20% of Black workers can work from home. I’ll demand a resolution committing the City Council to requesting that the U.S. Congress enact Medicare for All. That resolution will also direct the City of Ann Arbor’s Community Services Area Administrator to immediately fill in the gap until Congress acts, by finding and enrolling all eligible Ann Arbor residents lacking health and dental coverage into the Washtenaw Health Plan (including WHP Plan B), into the State of Michigan’s Healthy Kids Dental program, and into its Healthy Michigan Plan. I will ask that this resolution be communicated to every member of the U.S. Congress by email.

Seventh, I will tell the City Council to buckle up and fiercely REJECT racism, which is deadlier than COVID-19. I’ll demand a resolution requesting that the U.S. Congress approve Universal Basic Income (UBI) payments of $2000 per adult per month — and, failing that, the Michigan legislature must do so. The resolution will also commit City Council to direct a stopgap payment of $1000 per month to every unemployed adult in Ann Arbor who isn’t receiving benefits under the federal Coronavirus Aid, Relief, and Economic Security Act (CARES), and also isn’t receiving any UBI payments.  I will ask that this resolution be emailed to every member of the U.S. Congress and every member of the Michigan legislature.

Universal Basic Income is a necessary solution to hunger and homelessness. Food banks and shelters cannot fill the need for food and housing by themselves.

Without UBI, more armed Confederate militias will be storming the Michigan legislature, unemployment will empower them politically, and the pandemic will further devastate the Black community. Those white vigilantes are supported by Trump and the legislature’s Republican majority, which is attempting to force open workplaces and thereby kill workers’ eligibility for unemployment benefits. In fact, one Michigan state senator recently wore a Confederate face mask to the senate floor. Without UBI, more will die from COVID-19, as shown by extremely high infection rates at meat processing plants.

Eighth, I’ll tell the City Council to get a backbone and stand up for human rights. I’ll demand a simple 7-word City Council resolution which states “We are against military aid to Israel”. You know that the many Palestinian members of our Ann Arbor community, the many human rights activists in our community, are horrified by Israel’s massacres of the occupied Palestinian people, and by the $38 billion which Congress is paying Israel to keep pulling the trigger. City Council chambers have repeatedly been filled with Ann Arborites demanding a boycott against Israel. City Council has approved many resolutions focused on global issues, most recently supporting a boycott of Wendy’s and opposing global warming. So don’t even try to write Palestinians out of our community, or out of our hearts. If you can stand up for the human rights of Wendy’s farmworkers (as you should), then you can damn well stand up for Palestinian human rights too.

Ninth, I’ll tell City Council, as I have done since its March 16th meeting, to plan for field hospitals before the COVID-19 pandemic overwhelms existing hospitals, nursing homes, and rehabilitation centers. I’ll demand a resolution directing the City Administrator to deliver an Ann Arbor field hospital plan, in cooperation with Michigan Medicine and the State of Michigan, to include an adequate numbers of beds, equipment, physicians, protective gear, cleaning supplies, and tests. That plan should include proposals for the conversion of hotels, dormitories, city properties, and university properties into field hospital facilities which can adequately provide for treatment, isolation, and recovery for COVID-19 patients, and for those patients displaced from local hospitals and care centers due to COVID-19.

Tenth, I’ll tell the City Council to approve a resolution committing to an expansion of our mass transit — including microtransit, paratransit, and garage facilities capable of recharging electric AAATA vehicles, and committing to advocate for more regional transit, until no one who lives and works in Ann Arbor will be forced to shoulder the expense and hazards of automobile ownership. I will ask that this resolution request the AAATA CEO’s expense and effort estimate to achieve that expansion, along with a listing of local, state, and federal funding sources which could feasibly pay for that expansion. I will further ask that the resolution be communicated to every member of the AAATA Board of Directors, to every Board member of the Regional Transit Authority of Southeast Michigan, and to every member of the Michigan legislature by email.

Be aware that it’s not enough for the City’s Office of Sustainability and Innovations to express its best wishes for the reduction of greenhouse gas emissions and then toss a few solar panels up on city buildings. No, that’s nowhere near enough.

For sustainability, locally and globally, we need a concrete reduction in cars. That means the City Council needs to appoint AAATA board members who will provide us with more mass transit now. The bus (or paratransit) should pick you up everywhere, frequently. Those buses, increasingly, should be electric as their cost goes down and battery capacity goes up. The City Council should support millage renewals when necessary to fund the transit we need. That is much cheaper than effectively telling everyone to shell out $20,000 for a car. To the extent that our City can push for meaningful regional transit, we should do that too.

That is cheaper than the current situation, where everyone functions as their own individual bus company, with their own personal fleet of buses in their own garage, adding to the ruination of our roads, and to the congestion of our streets, highways, and city space. A city packed with cars costs us too much, in our environment, and in our personal finances. The single biggest protection we can have, against global warming, is a big increase in our mass transit services, and our regional transit, when and where we need them. That requires action, not just talk.

June 3, 2020 Imagine what $30 million every year could do for Ann Arbor’s community development, for example Ann Arbor's Jobs Corp program -- run by the Neutral Zone -- to get every kid ready for college, get them into college, get their college paid for, and launch...
Read More

Statement by Dr. Mozhgan to the Ann Arbor City Council, the Mayor and the Human Rights Commission

Ann Arbor, Michigan: US sanctions are killing Iranians during a global pandemic. Listen to the outcry demanding an immediate stop to all sanctions on Iran to protect lives. See the articles on the subject which have been released in recent days; some are referenced...
Read More

The City Council needs to start setting up a field hospital for this pandemic -  Ireland & Italy are doing just that. Otherwise, existing hospitals will be overwhelmed.   As the University of Michigan campus is evacuated, it can become the site of a field...
Read More

This pandemic is just the beginning. Here is my public health program as your City Council candidate.

This pandemic is just the beginning. Here is my public health program as your City Council candidate March 13, 2020 For Immediate Release CC: Ann Arbor City Council, to the Mayor, and to the Human Rights Commission Ann Arbor, Michigan: This is a good time to share my...
Read More

To: Mayor Taylor and Ann Arbor City Council Regarding: DC-1 19-1887 - "Resolution Supporting the Environmental Protection Agency’s Active Involvement with the Gelman Site and Encouraging its Listing of the same as a “Superfund” Site"   Your vote, wishing for a...
Read More