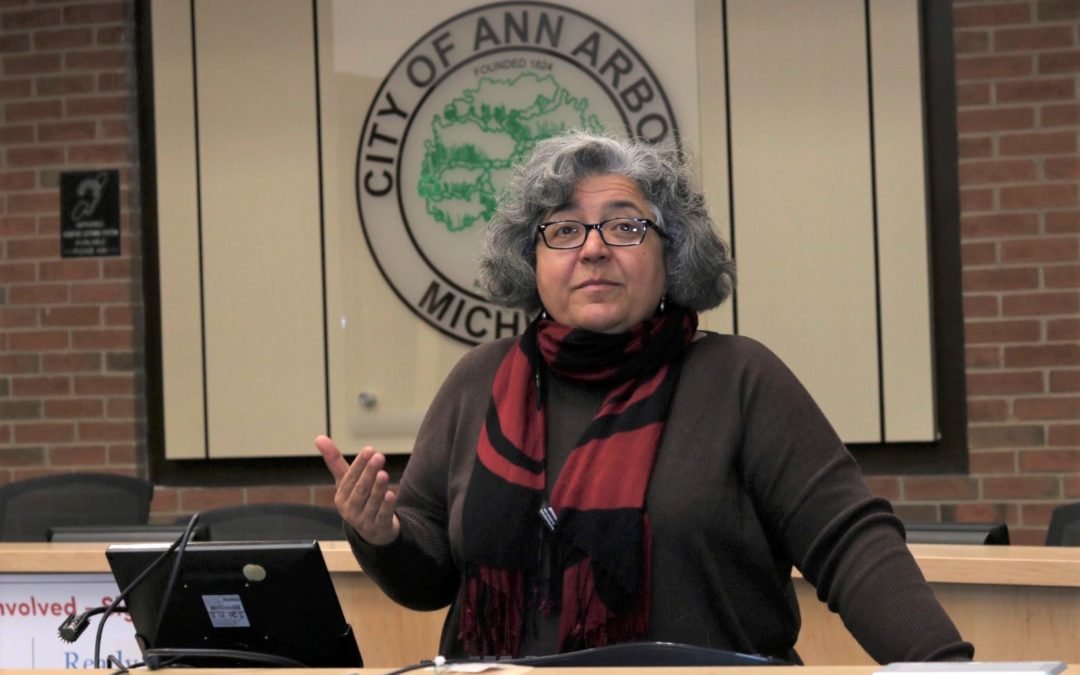 Imagine what $100 billion every year could do nationwide if spent the same way.

To be clear, I am for funding our social support needs instead of the police. I am for getting the youth installed in college and then a good job – not into jail.

Again, I am against funding the police. Our current system of policing is deeply racist, violent and militarized. For civilian use, a new system of policing must be created. A system that focuses on protection of the public and de-escalation of crises rather than the orientation of an occupying army. Minneapolis is already in the process of dismantling the police and replacing it with social workers and mental health workers.

The biggest piece of the general fund budget in Ann Arbor is the police department ($30.7 million). Community development has only one sixth of that ($5 million). As a city, we must start taking steps to channel that $30 million towards community development. That means beginning the process of reallocating resources, funding, and responsibility away from police and toward the kind of law and order already enjoyed by the rich: Access to good education, academic mentoring, job placement, day care, after-school programs and classes.

The Cream of Society – and their representatives in Lansing – don’t expect to be policed. They expect communities of color to be starved and “proactively” policed into submission, and limited to a minimum wage of $9.65 an hour.

The Cream of Society already has instant access to tangible power for their kids– that means education at all levels, the lifetime cash contacts that come from four years at U-M or Harvard, jobs, health care, and mental health services that low-income communities are often denied. The Cream of Society have their lives laid out for them. Their work pays them royally. Who do you think is bagging your groceries and catching COVID-19? Not the Cream of Society.

When the Cream of Society plunders (for example, by keeping a generation of Black New Yorkers away from nice apartments), when the nation’s financial and political leaders keep the wealth flowing so much upwards, and so little downward, that sweet setup takes $100 billion a year to maintain — $100 billion a year in policing.

Trump is the poster boy for that. Sued for racially discriminatory housing practices, and defeated and defiant and victorious at the highest levels of business and politics.

He rose to the top of American political power and became a billionaire even after he howled for the blood of the Central Park defendants, even after he rose to fame by casting doubt on whether the first Black President was really born in America or not.

In other words, it is no accident that $100 billion is spent nationally on policing and millions of Black parents have to give their sons “The Talk” to remind them that they are utterly without protection in this society. Utterly and completely naked to being shot by police, even if on their best behavior. Proof: Philando Castile.

The most economically vulnerable residents must rely on Ann Arbor’s Community Development Unit for the delivery of housing, economic development and human services.

So the more we fund Ann Arbor’s Community Development Unit, and the less we fund the police, the better.

Until the police are finally replaced with social workers, the Ann Arbor police oversight commission should be empowered to fire police chiefs, pick a pool of finalists to replace police chiefs, and have equal say on discipline handed down to police officers.

Immigration infractions should not be treated as crimes. To the maximum extent allowed by law, Ann Arbor shouldn’t help ICE escalate confrontations with undocumented workers. In fact, Ann Arbor should discontinue any intergovernmental agreement with ICE. Ann Arbor should implement incarceration prevention measures for minor offenses like a broken tail light.

I am against having police in schools

School is no place for the police. I advocate for police-free schools. Ann Arbor, and all cities, should follow the example of the superintendent of the Portland, Oregon Public Schools by replacing police – called school resource officers (SRO’s) — with counselors and social workers.

Instead of imitating a jail atmosphere, schools need to offer students the emotional, and mental health supports they need to thrive. Rich kids have that. I say everyone should have that. Providing support to students can help them feel safer, cope more effectively, and ultimately be better able to focus on learning and developing.

What the kids of our community don’t need is more police beating them down to make way for the Cream of Society. Billionaires need cops (100 billion dollars’ worth of cops across the U.S.) to carve them a clear path to the goodies in this pandemic time.

Schools are failing to address students’ mental health needs. It’s wrong to shift resources away from social workers and towards school security guards. These shifts reflect the national habit of policing, as minority students are more likely than white students to attend schools with security guards but no social workers.

I am against ‘proactive’ policing

During his run for Mayor, Jack Eaton (the Ward 4 incumbent) posted this on his campaign website: “I regularly seek to add police officers to allow for proactive policing, including traffic enforcement and downtown beat officers.”

“Proactive policing” often means the abhorrent practice of stopping and frisking nonwhite urban residents. I’m against that. The Crea of Society doesn’t have to endure that. Neither should the rest of us.

“Mozhgan Savabieasfahani, an environmental toxicologist who is running for council, urged city officials to look to lessons learned in other countries and set up field hospitals now.”

June 3, 2020 Imagine what $30 million every year could do for Ann Arbor’s community development, for example Ann Arbor's Jobs Corp program -- run by the Neutral Zone -- to get every kid ready for college, get them into college, get their college paid for, and launch...
Read More

Statement by Dr. Mozhgan to the Ann Arbor City Council, the Mayor and the Human Rights Commission

Ann Arbor, Michigan: US sanctions are killing Iranians during a global pandemic. Listen to the outcry demanding an immediate stop to all sanctions on Iran to protect lives. See the articles on the subject which have been released in recent days; some are referenced...
Read More

The City Council needs to start setting up a field hospital for this pandemic -  Ireland & Italy are doing just that. Otherwise, existing hospitals will be overwhelmed.   As the University of Michigan campus is evacuated, it can become the site of a field...
Read More

This pandemic is just the beginning. Here is my public health program as your City Council candidate.

This pandemic is just the beginning. Here is my public health program as your City Council candidate March 13, 2020 For Immediate Release CC: Ann Arbor City Council, to the Mayor, and to the Human Rights Commission Ann Arbor, Michigan: This is a good time to share my...
Read More

To: Mayor Taylor and Ann Arbor City Council Regarding: DC-1 19-1887 - "Resolution Supporting the Environmental Protection Agency’s Active Involvement with the Gelman Site and Encouraging its Listing of the same as a “Superfund” Site"   Your vote, wishing for a...
Read More